When reviewing Ethel Barrymore movies, “Pinky” is a film not to be missed. While the movie may not be palatable to all Barrymore fans, considering that Ethel’s screen presence is only diminutive compared to some of her other films, she still holds a key role in the movie, and her character is essential. 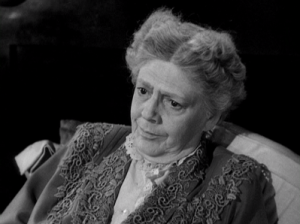 There has been many films released during the years about race and prejudice. Many might say that it’s a little outdated, but the subject matter is still as relevant today as it was back in 1949. These films are not only entertaining, they are interesting, educational, and true to life. Some of these films include, “Guess Who’s Coming To Dinner”, “Imitation Of Life”, and “Pinky”.

Pinky is a 1949 drama about race and prejudice. It was adapted from the Cid Ricketts Sumner novel titled “Quality”, with the screen play by Philip Dunne and Dudley Nichols. Superbly directed by Elia Kazan, who was known as one of the most honored and influential directors on Broadway and Hollywood history, and produced by Darryl F. Zanuck. The film stars Jeanne Crain, Ethel Barrymore and Ethel Waters, who all garnered Academy Award nominations. 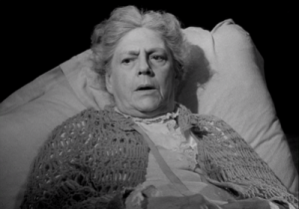 The film tells the story of Pinky Johnson ( Jeanne Crain ), a light skinned black qualified nurse, who returns home to her catachrestic negro grandmother, Dicey ( Ethel Waters ) dilapidated dwelling in the south. For most of her life, Dicey has raised Pinky, but sent her up north to acquire a better education than what Dicey had ever achieved as a laundress. On the day of her arrival home, Pinky confesses that she passed as a white while studying for a career in nursing, and to add to the already troublesome dilemma, she had fallen in love with Dr. Thomas Adams, a white native who is incognizant about Pinky’s black heritage.

Altercations ensue when Pinky feels that she doesn’t belong in the town. First she is harassed by the local law enforcement after attempting to reclaim money owed to her grandmother, and later she is slightly beaten and sexually assaulted by two white men who think that Pinky is of white lineage. With this embroilment, Pinky decides to return north to pursue further education and work in nursing, but before she does, she is approached by her grandmother who asks her to stay in town temporarily to care for her elderly white friend and neighbor, Miss Em ( Ethel Barrymore ), who is dying and can’t afford to hire a qualified nurse. Pinky refuses at first. She has always disliked Miss Em, and recalls a story about a negligible ruckus she had with Miss Em when she was younger. After learning that Miss Em personally cared for Dicey when she was ill with Pneumonia, she agrees to look after her, and peregrinates to Miss Em’s residence across the field, where she nurses the tenacious, ailing neighbor through her final days. Pinky doesn’t hide her resentment for Miss Em, as she feels that she is doing the same thing her grandmother did, but as time progresses the two develop a mutual respect for each other, which results in a friendship being formed.

When Miss Em dies, she bequeaths her house, property and land to Pinky, but she faces a tough opposition when Miss Em’s avaricious relative Melba Wooley tries to challenge Pinky by protesting a new will in court, and causes controversy around town.

“Pinky is a great movie, and very groundbreaking for it’s time. The only downfall is the duration of Ethel Barrymore’s screen time. I would have liked to have seen Ethel’s role more built up, allowing her more screen time to exhibit her commendable acting potential to audiences worldwide, but when Ethel does appear, it’s gold.

Ethel Barrymore delivered a meritorious performance in her fine portrayal of Miss Em. She chewed up all the screen time she was given with her characters caustic and acidic aura, which really gives her character some bite, while bringing the film to life. Ethel Barrymore is a virtuoso of the entertainment industry. In every film she’s appeared in she walks away with the whole picture, and that is clearly evident in this film. She steals the movie with her sterling performance of an ailing woman with a no nonsense attitude who is down to the concluding chapter of her life. Her character is very obstinate, and adamant in her own beliefs, but underneath she’s an amiable and generous person who can see the human soul.

Jeanne Crain and Ethel Waters both gave an excellent and copacetic performance, and were magnificent all the way through the picture. Jeanne Crain is such an underrated actress, and definitely deserves more recognition than what she has attained through the years. In “Pinky”, Jeanne transmitted all her acting finesse on the screen, and gave the best performance of her career as a woman who comes to grips with her true identity. She is so dignified as she walks through the town, soft-spoken yet strong, refusing to come down to the level of those around her. The role as Pinky Johnson is not an easy role to play, especially for a white actress, but Jeanne Crain managed to pull it off by reaching the pinnacle of her success.

“Pinky” is an enthralling film, and very enjoyable to watch. The solid cast, especially Ethel Barrymore is one of the reasons that make the film so laudable. It’s no wonder all three leading actresses earned Academy Award Nominations for their roles, but it’s such a shame they missed out.

Lena Horne initially campaigned to play the title role in this movie (she was light enough to photograph “white”), but in the end, the movie studio felt white American audiences would feel more comfortable with a white actress, especially since love scenes with a white actor were involved.

Linda Darnell showed interest in the lead role, but Darryl F. Zanuck noticed that her character resembled her character in Forever Amber (1947) too much. Fearing comparison, he rejected her for the lead.

“Lux Radio Theater” broadcast a 60 minute radio adaptation of the movie on September 18, 1950 with Ethel Barrymore and Jeanne Crain reprising their film roles.

Melba Wooley: “Cousin Em, what do you mean, gettin’ sick like this?”

Miss Em: “When you’re eighty years old, you expect to be sick. Sit down.”

Miss Em: “I don’t. It’s old, and I won’t have it minimized. Takes a lot of livin’ to get there, and pure, cursed endurance. Eighty years young indeed!”