This year I’m taking part in the ‘Classic Television Series Blogathon’, which is hosted by ‘A Shroud Of Thoughts’. For my contribution I will be exhibiting a piece on “The Miraculous Journey Of Tadpole Chan’, an episode from one of my favorite television series “The Barbara Stanwyck Show”. 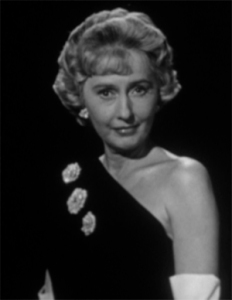 A few years before Barbara Stanwyck gave her momentous portrayal of Victoria Barkley in the perennial television series, “The Big Valley”, she made headlines by hosting her own television show titled “The Barbara Stanwyck Show”, a short lived American anthology series which ran on NBC from September 1960 to September 1961. Even though the show only lasted for a season, it proved to be a success, earning Barbara a plethora of accolades and an Emmy Award for ‘Outstanding Actress In A Series’, which is featured on the special features section of the box set.

In total there were 36 episodes, and not only did Stanwyck serve as host, she also appeared in 34 of these episodes, which showcased some of her most culminating performances as an actress on the small screen. In the four episodes she didn’t star in she regarded them as back door pilots for other actors who were starting out in the business to give them a chance to be recognized or stars that were out of work at the time.

The Barbara Stanwyck Show is also an historical experience into the world of television as it was filmed at Desilu, the studio that was launched by Lucille Ball and Desi Arnaz. Even before the famous Desilu logo appears, familiar names can be witnessed at the end credits. During the season, the show featured notable guest appearances from eminent names including, Joseph Cotten, Dana Andrews, Joan Blondell, Charles Bickford, Dennis Hopper, Jack Nicholson, and many others.

Among the many episodes during the course of “The Barbara Stanwyck Show” is “The Miraculous Journey Of Tadpole Chan”, which is the one that I’m writing about today. At the commencement of each episode, Barbara appears on stage, bearing nothing but glamour, adorning herself in an elegant evening gown and white gloves, while she introduces the next segment and explains the synopsis of the story, for example this is her welcoming speech in “The Miraculous Journey Of Tadpole Chan”.

“Good evening. Tonight we take you to the most exciting of cities, fabulous Hong Kong. There, with Ralph Bellamy as our guest star, I play the role of a wheeling and dealing adventuress who finds herself in a tangle of trouble with a small Chinese boy and an American vice-consul. Albert Beich wrote the original teleplay and Jacques Tourneur directed. And now in just sixty seconds, the first act of “The Miraculous Journey Of Tadpole Chan”. 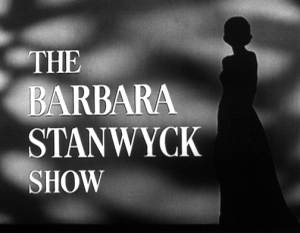 In “The Miraculous Journey Of Tadpole Chan”, Barbara plays Josephine Little, an adventuress who resides in Hong Kong, but was born in China. During a trip to the United States Consulate, she encounters Tadpole Chan, a young homeless Chinese boy who takes off with her shoe to fix the heels. When he returns the newly amended shoes to Josephine, she thanks him for his kindness, and in return he badgers her into buying a Lucky Buddha from him. When he promises her that it would help her locate a silk dealer in Kowloon she accepts.

Later the boy follows Josephine on a boat trip and asks her to help him attain a U.S Visa. When she explains to him that she wouldn’t be able to help him, she warns him not to gamble on her as the results could prove unsuccessful. Problems arise when he turns up at her house insisting that she helps him acquire a Visa, because there are restaurant owners in Pittsburgh who wants to adopt him, and have sent $800 to Hong Kong for airfares, but because the immigration laws require identity papers and a Visa, the money for his flights are kept in the bank. With no home to go to, she provides him with accommodation in her house until she can assist him in getting a Visa. When he is refused he peregrinates to China, dodging border security along the way to obtain an old school record from his former village.

Back in Hong Kong, he shows the school records to the American Vice Consul, who after witnessing the documents offers abetment in flying him to Pittsburgh to his new family.

For Barbara Stanwyck fans, the release of the complete series on DVD was like finding a vein of pure gold in a mine of lost treasures. Included in the special features is an unaired pilot and the video clip of Barbara Stanwyck receiving the Emmy Award for her well deserved performances in these suspenseful and riveting thirty minute episodes. All the programs are crisply written and directed. In her introductions, Stanwyck makes a point of mentioning who wrote and directed each episode.

This collection is also a reminder of how much television lost with the disappearance of the half-hour dramatic anthology series. The collection is solid gold. 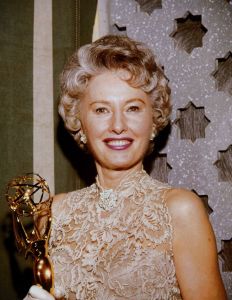 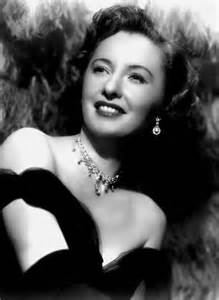 2 thoughts on “THE BARBARA STANWYCK SHOW: THE MIRACULOUS JOURNEY OF TADPOLE CHAN.”