This post is part of the See You In The Fall Blogathon, hosted by Steve at Movie Movie Blog Blog. Click Here to view the other entries being exhibited during this event, but don’t fall on your way over.

During the years there have been many different forms of comedy. While screwball comedy is considered the most popular and intelligent of the genre, it’s not necessarily the most enduring. Before the birth of the screwball farce, audiences were roaring with laughter over the pratfalls and pranks of Buster Keaton, Charlie Chaplin among others. This particular method known as physical comedy has continued to enthrall generations worldwide for decades.

Physical Comedy first came to the fore in the silent era of cinema when acting veterans, Buster Keaton and Charlie Chaplin employed outlandish hilarity stunts or exploitation of movement into their films as a character exhibition or by incorporating it into dramatic scenes to bring some comedic relief into the picture.

As the years progressed, Physical Comedy has been essayed consistently by an array of notable stars who have adopted the facetious technique for their own work. Some of these celebrities convey physical satire endlessly on their filmography, while other stars combine it with other elements of comedy.

Doris Day who became one of the worlds most beloved comedians pioneered her way through a myriad of productions where she demonstrated the fine art of physical comedy. By 1959 when she commenced her three film collaboration with Rock Hudson, Day had explored almost every facet of the comedy genre and succeeded on all avenues.

Rock Hudson was just as adept at comedy, and after completing Pillow Talk their first film together, audiences were enraptured by his jocular aura and the undeniable chemistry with Doris Day that they campaigned for the couple to star in more movies together.

When delving into the filmography of Doris Day to examine all the variations of comedy, Send Me No Flowers is one film that really encapsulates the physicality attributes of the genre.

Superbly directed by Norman Jewison, and written for the screen by Julius J Epstein, Send Me No Flowers marks the final onscreen pairing of Doris Day and Rock Hudson. 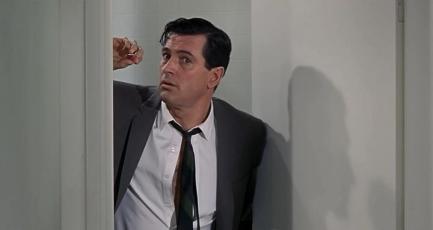 Send Me No Flowers is an amusing satirical farce which centers Rock Hudson as George Kimball, a hypochondriac who is contentedly married to Judy ( Doris Day ) and living peacefully in the suburbs.

At a consultation with his doctor concerning chest pains that he’s been experiencing, George accidentally overhears a personal telephone discussion regarding a terminally ill patient who is down to the concluding chapter of his life. Upon hearing the conversation, George automatically mistakes the whole situation and believes that it’s him facing mortality in a few weeks.

Fearing that he’s dying, George decides to keep it a secret from Judy, and with the help of his friend and neighbor, Arnold Nash ( Tony Randall ) he sets about making future arrangements for his wife.

During the course of the days following, altercations and misunderstandings arise, resulting in one of the most hellacious laugh fests of the year.

Even though George is really convinced he’s dying, the films plot is basically one large gag with George having his close friend and eventually Judy believing that he’s facing mortality, and allowing those around him to help with preparations leading up to the death.

Watching the movie unfold is humorous. From the moment the two stars make their entrance, the comedic elements begin to flow, and when it starts, it never stops. The entire movie is abounded with non stop laughter as Doris Day and Rock Hudson showcase many forms of different comedy.

The physical comedy elements are introduced not long after the film starts. Here we see Judy going outside to collect groceries and on her way in she discovers that the door has been locked. To help build the hilarity of the scene, George is in the shower, which means that he is unable to hear Judy pounding on the door. With this latest chaos, Judy accidentally drops the food on the ground, resulting in having her freshly cleaned slippers covered in egg. Particles of slapstick humor is incorporated into the physical attributes  when Judy’s predicament is causing commotion, leaving her with no other option but to make a pratfall through the window in order to get back inside.

That’s not where the physical comedy elements stop either. Further on in the film, Judy, George and Arnold are at the golf course. While George and Arnold are engaging themselves in a game of golf, Judy is riding the golf buggy. Minutes later she gets involved in yet another mishap, and finds herself zooming down the hill fast in the golf cart, unable to stop she rides through the flowing sprinklers, getting her clothes saturated in the process.

As the film progresses, the comedy gets frothier. Another interesting scene that epitomizes physical comedy is when Judy pushes George out the door in his wheelchair after discovering that he’s not really dying. Leading up to this moment in the film is perhaps the most funniest sight gag in the whole production. Before pushing George out the door, Judy walks over to the bed where George is sleeping and delivers a hard slap on his face, which startles him. The dialogue that follows is very acute and witty at the same time.

Without delving into every sequence, the film also contains a crisp script abounded with sharp and snappy dialogue that will get the viewer laughing.

From the lush technicolor to the exquisite sets and wardrobes, Send Me No Flowers is the perfect film to watch when your in the need of some laughter medicine.

There is a small inside joke about half-way through the film. Doris day plays Judy Kimball. Clint Walker plays an old flame who calls her by her maiden name, “Judy Kappelhoff”. Doris Day’s real name is Doris Kappelhoff.

George refers to Green Hills, the cemetery where he purchases three plots, as “a Levittown of the hereafter”. This reference, likely to be lost on modern audiences and certainly on foreign ones, is to four communities of that name, built by Levitt and Sons, a building firm. These communities, built after the Second World War to address the housing shortage, were noted for the mass production of the suburbs and the homogeneity of the housing designs. The most famous Levittown community is in Nassau County, New York. 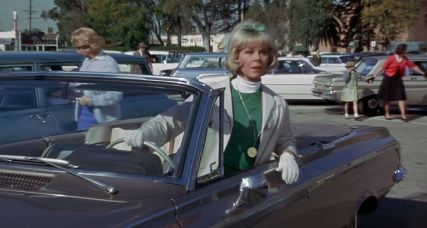 Judy: “When he tells me he’s dying and he doesn’t DIE… wouldn’t he know that I’d get SUSPICIOUS?”

George: “You are a one hundred percent, non-shrinkable, no-money-back, rat fink.”

Arnold: “Complaints, complaints, nothing but complaints! I could do some complaining, too, you know. You ever cut your toenails?”