During the years of entertainment history there have been a plethora of stars who have left a trail of distinction in this world with their inimitable prowess in the arts, but nobody has ever reached the legendary status that Elvis Presley attained.

Along with his gaelic charm and lush sex appeal, Elvis possessed a unique flair for performing that not only made him a prodigy of music but transformed him into the most significant cultural icon the world has ever known.

In addition to his career as a successful vocalist, Elvis also garnered recognition on the cinematic front where he enthralled audiences with his magnetic screen presence in a myriad of musical productions that gave him the opportunity to showcase his indelible talents in various song and dance numbers.

After making his film debut in Love Me Tender in 1956, Elvis starred in array of notable productions that earned him critical acclaim. By 1964, the results of his motion picture work proved to be as triumphant as his profession as a solo artist.

In 1964, Elvis Presley was cast in the role of Charlie Rogers in Roustabout, a film which starred him alongside acting veteran Barbara Stanwyck in her second last motion picture.

Roustabout was directed by John Rich and produced by Hal Wallis with the screenplay by Anthony Lawrence and Allan Weiss. On it’s first submission the screenplay was nominated for a Writers Guild Of America Award for Best Written American Musical, though Variety’s rating of the finished production was only moderate. 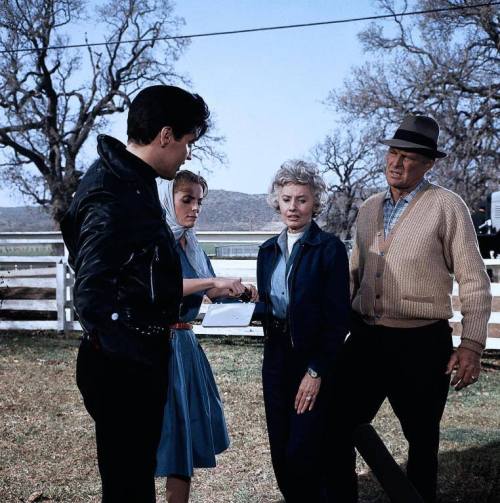 The film follows the story of Charlie Rogers ( Elvis Presley ) a notorious biker who has just spent a night in prison after being involved in a brawl outside the teahouse where he performed his last gig. The next morning he unexpectedly secures a job as a roustabout at the traveling carnival owned by Maggie Morgan ( Barbara Stanwyck ) after being slightly injured in a motor cycle accident caused by Maggie’s irate employee Joe Lean ( Leif Erikson )

While working at the carnival Charlie finds himself amid many conflicts with Joe regarding his feelings for Cathy, but at the same time his singing makes him the local attraction at the carnival which not only garners him acclamation but draws large crowds to the struggling circus.

Roustabout may not be considered a family movie, but it’s pure household entertainment. Apart from the films main foundation being Charlie amassing a legion of patrons due to his musical ability, it also offers a premise that the whole family will enjoy.

Despite from the plot being formulaic and entirely predictable, the film sends out a crucial message about the importance of family value. At the start, Charlie is rebellious with a mix of selfishness, but as time progresses his character becomes more amiable as he begins to learn the values of loyalty, honesty and ethical conduct. This alone makes the film a commendable piece of entertainment.

The major highlight of Roustabout is the assembled cast that it gathers. Elvis delivers an excellent performance in his portrayal of a character that appears to be rather complex. Elvis as Charlie has two sides. He can be turbulent and shrewd, but when it calls for a change of persona, Charlie can exhibit all the elements of high moral standards by being compassionate.

Barbara Stanwyck is another redeeming feature for the film. Here she plays Maggie Morgan, the strong willed and assertive owner of the carnival. Compared to most of her earlier roles, Roustabout doesn’t really provide Stanwyck with any material that she can really sink her teeth into. Instead she portrays a character that is rather mellow and affable, which allows Stanwyck to move around at a leisurely pace.

By the time Roustabout was made, Barbara Stanwyck’s motion picture career was in decline. That same year she starred in The Night Walker alongside her ex husband Robert Taylor, which served as her final film role. In the years following, Stanwyck acquired altitudinous accolades in the television medium and delivered memorable performances as Victoria Barkley in The Big Valley and Mary Carson in The Thorn Birds.

With a plausible plot and musical numbers that epitomizes the incomparable talents of Elvis, Roustabout is the true definition of a perennial classic from the 1960’s.

Raquel Welch makes an early appearance as one of the college kids at the Tea House.

Elvis Presley performed his own stunts in the movie.

Mae West was initially offered the role as Maggie Morgan, but when she declined, Barbara Stanwyck was automatically second choice.

The motorcycle Elvis rides throughout the movie is a Honda 305 Superhawk.

Charlie: ” I never thought I’d be running off with the circus.”

Maggie: “Let’s get one thing straight. This is not a circus. This is a carnival. There’s a big difference.”

Charlie: “I guess you’re right. I guess a circus has elephants.”

Maggie: “What do you do when you’re not riding your bike?”

Charlie: “Just because you bailed me out doesn’t mean you own me.”