Following the success of last years ‘National Classic Movie Day’, Rick from ‘Classic Film And TV Cafe‘ has decided to host another blogathon for 2016, where the intent is to list five films you would like to have with you if you were stranded on a deserted island that is decked out with electricity, a projector and a big screen.

There comes a time in the lives of all classic cinema enthusiasts when you are forced to compile a list that documents your favorite movies in order. For anybody who is passionate about films this task proves to be difficult. Thankfully the opportunity very seldom arises and us film relishes can elude the problematic exercise. Today however a special assignment has emerged and all participating bloggers are to clearly state what five movies they would like to have with them on a deserted island for the occasion of ‘National Classic Movie Day’

For anybody who does not hail from our classic film celebratory pantheon the task would seem simple, but when you are diagnosed with a serious bout of old movie syndrome and spend most of your time being immersed in the immaculate presence of the stars and the treasures that graced the silver screen of yesteryear, it is a project that we approach with never-ending daunt.

When it comes to selecting these five movies the choices are endless. Classic movie fans are people who are enthralled in all genres in the film canon and have our hearts melted by a plethora of different titles. Coupling this obstacle are the stars who adorn these pictures with their inimitable talents. We all want to choose at least one film that features an actress or an actor who we consider to be our favorite, but once again this is where the problems start to flow. Any film that spotlights our idols are films that are highly extolled and ones that will never leave our side.

After rattling out my brains and scouring incessantly through my diverse range of films in my extensive collection, I finally decided on some precious gems that has the power to never exhaust me, even though I watch them over and over again. So without further ado, I’m about to unearth these perennial classics that will make my island vacation as colorful and vibrant as a film lovers paradise.

This atmospheric tale of murder and suspense is my all time favorite film. Packed with an abundance of thrills and chills, The Spiral Staircase takes viewers on an electrifying journey to the Warren mansion, situated in a sleepy New England town that is amid a fierce thunder storm and the untangling actions of a serial killer who is at large. Accompanying all the glories of this nail-biting classic is the masterful shadowy cinematography and Ethel Barrymore who steals every scene she’s in with her captivating portrayal of Mrs. Warren, the terminally ill mother who senses the evil around her.

Never before in the history of cinema has there been a film that ignites as much laughter as Bringing Up Baby. For a long stay on a deserted island the dazzling presence of Katharine Hepburn and Cary Grant along with the cuteness of Baby and George is bound to take you on a memorable adventure of harebrained schemes and witty disasters that result in an overload of hilarity. This unsurpassable Screwball Comedy is a must see classic.

You’ll never be lonely when you’ve got an array of glamour and talent that emanates from the impressive cast of Grand Hotel, who all swarm into this opulent establishment in Berlin with their occurring dramas that supplement the unusual happenings that take place. This film is the perfect showcase of classic stars which include, Joan Crawford, Greta Garbo, Lionel Barrymore and my all time favorite actor, John Barrymore who alights the screen with his suave demeanor and air of sophistication. It’s no wonder that Grand Hotel has left an indelible mark on cinema history.

Sometimes when your feeling rather melancholy, the only thing that helps is a good cry. When the need for tissues arise there is no better film than Broken Blossoms, a poignant and touching portrayal of Lucy ( Lillian Gish ), the tormented soul who is psychically abused and betrayed by her father, but later eludes her formidable existence when she is befriended by a Chinese immigrant before meeting her doomed fate. This groundbreaking classic clearly epitomizes the unique artistry of D.W. Griffith through it’s complexity and visual style that cements Broken Blossoms as a cinematic staple.

The best medicine is laughter, and you’ll need plenty of that on a deserted island. When you’ve got stars like Carole Lombard and William Powell, you don’t need to look far, and you’ll find it at the Bullock mansion where the eccentric and maniacal characters reside. My Man Godfrey is the perfect treat when your living a solitary existence in a far away abode surrounded by ocean, and Carole Lombard who is known as the ‘Queen of Screwball Comedy’ is guaranteed to cure your alienation from the rest of the world. 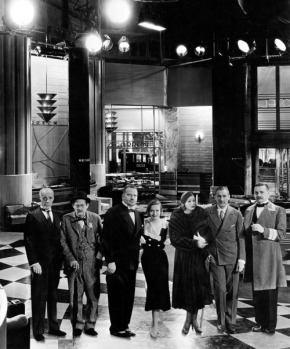 With a list that consists of five notable classics, I will be taking a trip down memory lane and into the days when talent, quality entertainment and real stars existed. Sadly I had to miss my favorite actress, Barbara Stanwyck out. I’m just hoping my stay on this island will end sooner than whats anticipated.