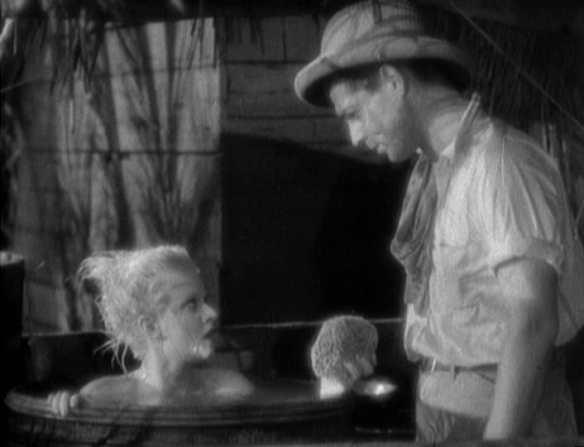 When it comes to films that arouse your sexual desire, productions from the Pre-Code genre are the perfect model of eroticism. Sizzling with suggestiveness, evocative nature, and anything that deals with the sexual denominator, this magical bygone era of Hollywood continues to cement itself in a reputable position in motion picture history.

The Pre-Code era dealt with a lot of issues that were prohibited once the Production Code was rigorously enforced. Films that were provocative in structure and revolved around themes that were immodest and openly seductive became a thing of the past and remained extinguished until decades later when movies that graphically depicted sex and displayed nudity were released.

Even before the establishment of the Production Code, certain films were rejected from the Censorship Board because of their overt sexual content and for seductive aspects that were considered too explicit for public viewing. Perhaps the best example of this can be seen in Red Dust ( 1932 ), a film starring Clark Gable and Jean Harlow in a role where she plays a prostitute who exploits her sexuality to arouse and stimulate the less enthused Gable.

“That’s a… a very polished little speech for a… barbarian.”

Although Red Dust managed to elude the strict refusals of the Censorship Board, it contains adultery and many elements of infidelity that could of easily been rejected for release even back in 1932 when illicit subject matters were candidly presented on screen. Just as well the rigid constraints that somewhat affected a myriad of films from the same period, including Baby Face were not as harsh when it came to Red Dust, because what we witness here is Pre-Code Hollywood at it’s greatest.

The film was released in 1932, a year that is now considered to be a memorable twelve months for movies with notable productions like Grand Hotel hitting cinemas and winning the Academy Award for ‘Best Picture’.

While Grand Hotel, a lavish spectacular that featured more stars than heaven, surpassed any other picture released that year, Red Dust ascended in stature right from the very beginning. The film boasted a stellar cast with acting veterans, Clark Gable and Jean Harlow colliding with the likes of Mary Astor and Gene Raymond. And it addition to all that, it was written for the screen by, John Mahin, and directed by, Victor Fleming, who would go on to direct such critically acclaimed masterpieces like, The Wizard Of Oz and Gone With The Wind.

Clark Gable and Jean Harlow were hot commodities in Hollywood. Noted for their sexual magnetism that was coupled by their on-screen chemistry, the two starred in six films together with Red Dust marking their second collaboration. During their first appearance in the 1931 crime drama, The Secret Six, Gable and Harlow became close friends, and would remain supportive of one another until the day Harlow passed away in 1937. Harlow had possessed an innumerable amount of qualities that Gable admired. He particularly relished her lack of pretense along with her casual and free spirited nature, but while many people have tried to envision a romantic relationship between the two, the connection they shared was completely different with Clark Gable acting as her protective older brother, who treated her like a lovable sister.

“I thought we might run up a few curtains and make a batch of fudge while we were planning on what to wear to the country club dance Saturday night.”

Originally, Red Dust was supposed to be a proposed vehicle for John Gilbert, who was set to play the role of Dennis Carson. This was an attempt to capitalize on his success in previous years, and to try to resurrect his suave and masculine appearance that was once an alluring enchantment for a plethora of female movie-goers worldwide, but this casting decision was soon abandoned due to Gilbert’s floundering descent into alcoholism, which helped fuel is premature death in 1936, when Gilbert was only 38. 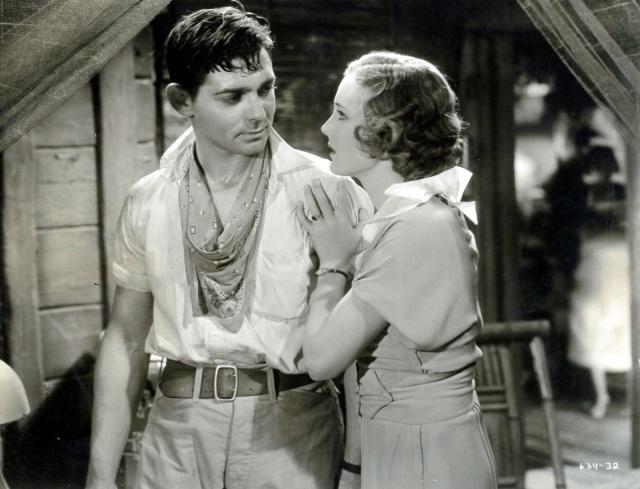 Red Dust was meant to be a monumental experience for Clark Gable and Jean Harlow, but just when the occasion started out as joyous, things took a bad turn. Shortly before filming commenced, Harlow married Paul Bern, the German born producer, who helped establish her career. Seeing as they had just eloped two months earlier, Harlow was in happy spirits during filming, and was euphoric about returning home each night to be with him. Things however were not to remain. On Labor Day, police were summoned to the home that Harlow shared with Bern. On their arrival they discovered that Paul Bern had either committed suicide or had been murdered when they found his naked body sprawled on the floor with his brains blown out, and a revolver clutched in one hand.

For years the suicide had remained a mystery, but as the decades progressed, it was revealed that part of the suicide was caused from a sexual development that would make it merely impossible for him to indulge in sexual intercourse. According to most biographers, Harlow was unaware of this condition, which would be kept a secret until more facts about the relationship between Jean Harlow and Paul Bern were unearthed. 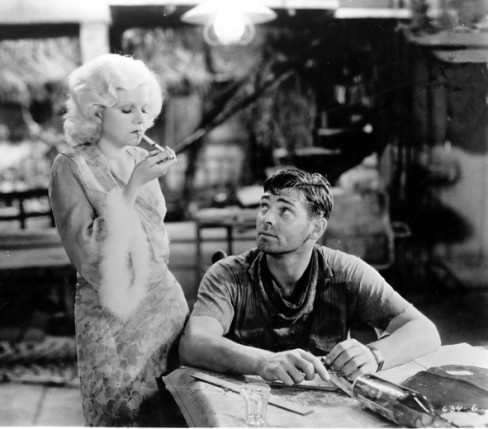 To add to the already formidable situations that Harlow and Gable were enduring while shooting Red Dust, were the arduous conditions and the grueling schedule. Filmed in the late Summer of 1932, when the sound stages were without air conditioning, the cast and crew underwent hours of discomfort due to working in the sweltering heat, where the smell of a jungle was emanating from everything. A lot of this had to do with the constructed Indochina backdrop that consisted of the constant releasing of moths and insects. Considering how difficult it was to work in these horrific conditions, Gable and Harlow were determined to complete the picture on time, and have it released on schedule.

Clark Gable and Jean Harlow ignite the screen in flames in this steamy Pre-Code production that was based on the 1928 play by Wilson Collison. Set on an Indochina rubber plantation during the monsoon season, the film tells the story of Dennis Carson ( Clark Gable ), the owner of the plantation, who is greeted to the unexpected arrival of Vantine Jefferson ( Jean Harlow ), a prostitute, who is on the run from the Saigon authorities.

After succumbing to Vantine’s charms, complications arise when Gary Willis ( Gene Raymond ), an inexperienced engineer, and his wife, Barbara ( Mary Astor ) join the establishment, and make sparks fly with Dennis Carson, who immediately falls in love with Barbara, leaving Vantine in a state of jealousy, while Dennis finds himself swept into a difficult love triangle that is hard to escape.

Red Dust may have never eventuated if it weren’t for the influence of Paul Bern, who had implored Louis B. Mayer to buy out Jean Harlow’s contract with Hughes, and sign her to MGM. Initially, Mayer had refused the offer. He viewed Jean Harlow as an abhorrent floozy, something that did not go well with his class of elegant leading ladies at MGM. Bern however was not going to stop there. He was determined to have Harlow signed to a contract with the studio. His next best preference was to urge Irving Thalberg, who eventually agreed after taking Harlow’s popularity and established image into consideration.

As a result of this decision, audiences worldwide are treated to endless hours of entertainment with the indomitable presence of Jean Harlow and Clark Gable in Red Dust, a film that is an exceptionally worthy addition into the Pre-Code canon.

Red Dust is a film that is totally ahead of it’s time. Brimming with fresh and suggestive dialogue that serves as a perfect accompaniment to it’s imaginative script, this picture has everything that a Pre-Code could possibly offer. Clark Gable with his ruggedly good looks is the owner of the rubber plantation. He is tough and stalwart with a demeanor that is as hard as nails, but along with his ferocious manner, he is a two timing cad, who would fall for any girl that comes into close contact with him, even if it is a hard boiled, wisecracking tramp like Vantine, a prostitute, who challenges him to seduce her.

At first we witness nothing but their personalities clashing. Dennis knows that Vantine is a prostitute, and has little time for her; that is until he observes whats underlying in her interior, and immediately succumbs to her alluring charisma, but in the midst of their steamy romance, their passionate love affair is interrupted when Gary Willis and his new wife, Barbara, who steals Carson’s affections, arrive on the plantation.

In the years that have progressed, the racism elements in Red Dust has remained a subject of controversy, but these aspects are not key features and can easily be overlooked since the main premise of the story is about the sexual progressiveness of Vantine, who lures and beguiles Dennis, but whose love is eventually overshadowed by the repressed, Barbara, who turns to Dennis for intimate and immoral comfort while trying to elude the weaknesses of her husband.

All in all, Red Dust is a memorable film that shouldn’t be dismissed. Not only does it spotlight the inimitable talents of Clark Gable and Jean Harlow, who exuded sexuality, it is an extremely engaging, sizzling melodrama that immerses movie enthusiasts worldwide. 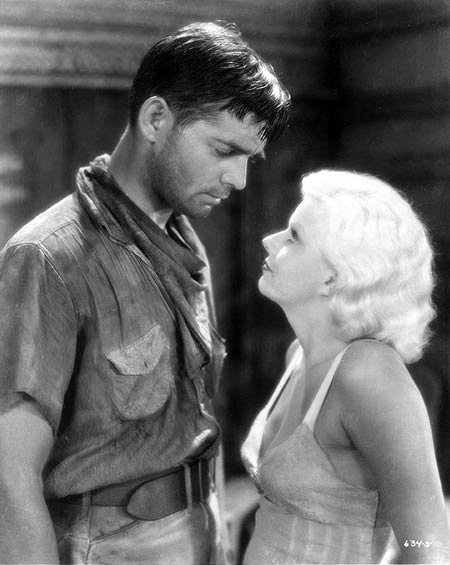 Red Dust was remade in 1953, with the title of Mogambo, which also starred Clark Gable.

During filming of the famous rainbarrel sequence, Jean Harlow reportedly stood up – topless – and called out something along the lines of “one for the boys in the lab!” Director Victor Fleming quickly removed the film from the camera to prevent any footage from reaching the black market.

Joan Crawford was initially cast opposite Clark Gable but MGM removed her to end the affair she was having with Gable.

The above post is my entry for the Hot and Bothered: The Films 0f 1932 Blogathon, which is hosted by, Once Upon A Screen and Cinemaven’s Essays From The Couch. To visit the other entries being exhibited during the event, please click here.