“I think half the success in life comes from first trying to find out what you really want to do. And then going ahead and doing it.” 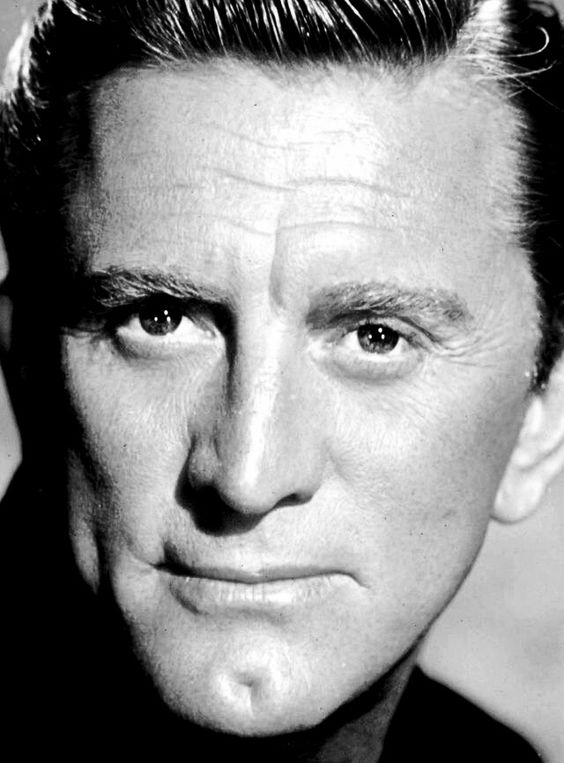 Kirk Douglas, the prominent actor whose immense talent was showcased in ninety-one acting credits celebrated his 100th birthday on December 9th, 2016. Noted for his trademark cleft chin, steely eyes and chiseled smile, Douglas rose from poverty and became a cinematic icon of the silver screen.

Even though acting was a profession that seemed impossible to a family who was trapped in a life of financial ruin, little Issur Danielovitch was destined to be a star from the moment he entered the world on December 9th, 1916. The baby with the glistening blue eyes who delivered a multitude of happiness into their dreary existence was the prized package of his Jewish immigrant parents, Bryna Bertha Sanglel, and Herschel Harry Danielovitch, a rag-man, who was constantly fighting for a dollar to support his family.

Living an impoverished lifestyle was not easy for a teenager with big dreams. Once he was old enough, Issur, who was now known as Izzy Demsky was forced to take on menial duties, which included selling snacks to mill-workers and delivering newspapers, so he could earn enough money to provide his family with food and the daily essentials. After working in a total of forty jobs, Demsky started to yearn for an auspicious and rewarding career, but with his inadequate funds, Izzy realized that it would take years to climb the ladder to success.

For a while, Izzy was unsure with what career path he should follow. However, while he was in high school he developed a profound interest in becoming an actor, and from that moment on he instantly knew that his dream destination was going to be Hollywood, a place that seemed far away to Izzy, who was trying his hardest to elude the cramped and stifling conditions in which he and his six sisters lived in at home. 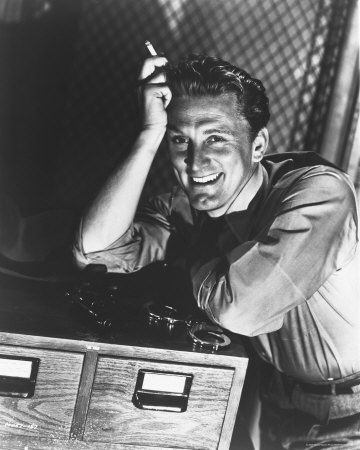 Dreaming of becoming an actor was a lot easier than to become one, but Izzy was determined that not even a price tag was going to get in the way of him achieving his dreams. Unable to afford tuition, he managed to talk his way into the Dean’s office at St. Lawrence University, where he presented them with a list of his previous accomplishments. The professor was that impressed with his resume that he offered him a loan, which he was to pay back once he attained steady employment.

For Izzy Demsky, this seemed like a long road that would entail plenty of setbacks, but not long after embarking on his acting expedition, Izzy secured a placement at the American Academy of Dramatic Arts, a prestige performing arts conservatory that helped launch the careers of a plethora of notable talents, who would soon adorn the silver screen. While studying at the academy he met an ambitious young student named Betty Joan Perske, who would later be known the world over as Lauren Bacall. The two developed a great rapport and became close friends. Bacall, who was eight years his junior also grew up in poverty, and knew what it was like to be constantly low on funds. However, Bacall felt sorry for Demsky, and did all she could to help him out, but the most effective thing she did was being the instrumental force behind his motion picture establishment. 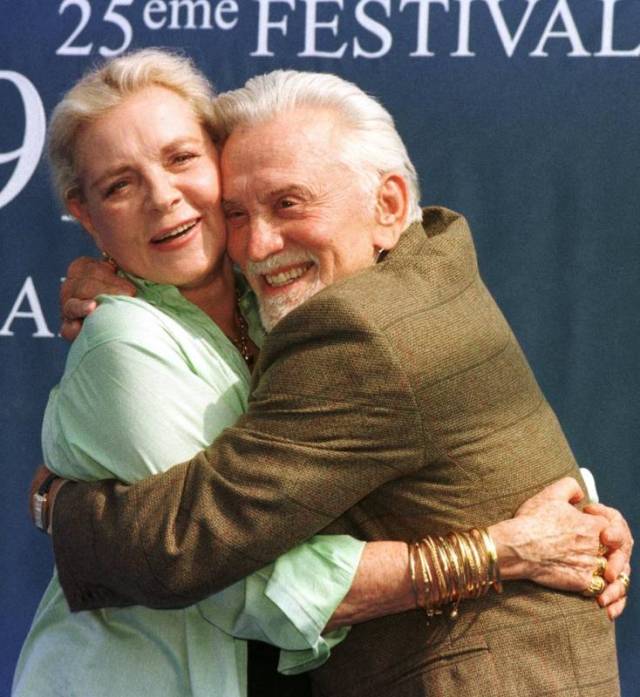 “I thought he must be frozen in the winter …. He was thrilled and grateful.” Sometimes, just to see him, she would drag a friend or her mother to the restaurant where he worked as a busboy and waiter. He told her his dream was to someday bring his family to New York to see him on stage. During that period she fantasized about someday sharing her personal and stage life with Douglas, but would later be disappointed: “Kirk did not really pursue me. He was friendly and sweet–enjoyed my company–but I was clearly too young for him.”

After a brief stint in The United States Navy, Izzy Demsky, who had legally changed his name to Kirk Douglas before he entered the navy, returned to New York to pursue a career in acting. The only position available for an individual with his range of experience was radio work and appearances in theater and commercials. However, this type of work didn’t exactly fulfill any major goals, but it did open the door to many endless possibilities, as well as providing him with the opportunity to make his mark on stage in 1943, by replacing Richard Widmark in Kiss and Tell. 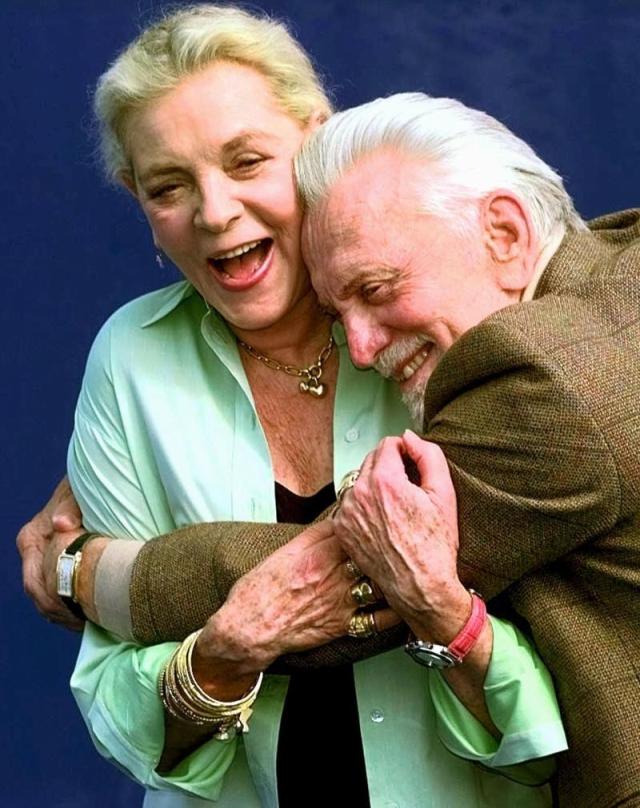 On November 2nd, 1943, Kirk Douglas took time away from the theater to marry, Diana Dill. The marriage was not always a happy reunion, but it did produce two childen, Michael, who was born in 1944, and Joel, born 1947. The couple divorced in 1951.

After a few years of considerable success on the stage, Douglas was content with his profession, and wanted to make that his life’s work. However, Lauren Bacall, who was already permanently established in Hollywood had different plans. She thought that Douglas should embark on a career in movies. If he was going to embrace motion pictures like he did the stage, he would receive triumphant results, and would be set for life. Initially Douglas was hesitant, and uncertain with what a future in film would bring, but when Bacall approached director, Hal Wallis, who was canvassing around for a new male talent, Douglas capitulated, and agreed to take the plunge. 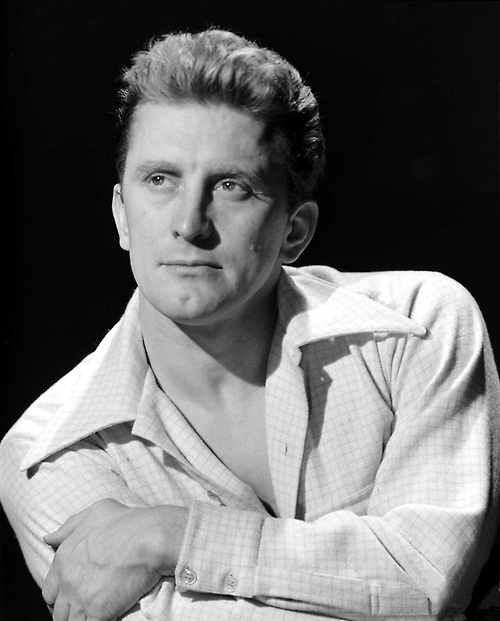 Hollywood was a totally different world to Kirk Douglas. It was foreign territory, a place that he would never have dreamed of visiting, but now after all these years, Douglas found himself in the movie capital of the world, and under the spell of Hal Wallis, who wanted Douglas to make his screen debut opposite Barbara Stanwyck in The Strange Love Of Martha Ivers, a film that would transform Douglas into a bona fide star. 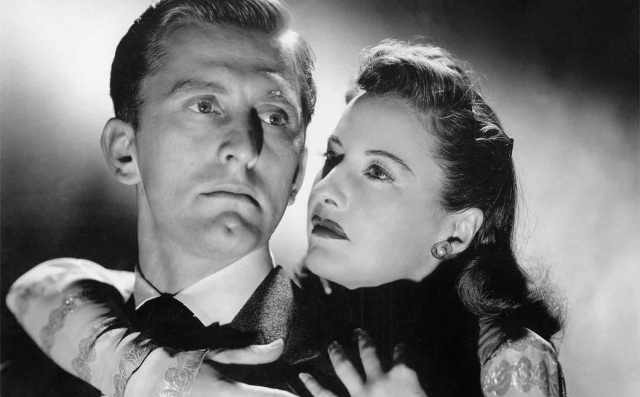 Unlike a plethora of stars whose film debuts are brief cameos, The Strange Love Of Martha Ivers, was an ideal production for a newcomer. Douglas played Walter O’Neil, an insecure district attorney, who is stung by jealousy and the brutal domination of his wife. This was the only time that Douglas would play a weakling, but even though his role was dissimilar to his usual tough and unyielding characters with a strong demeanor, Douglas already exuded all the qualities of a consummate and seasoned actor.

With a new life, and a career transformation, Kirk Douglas was planted in a reputable position in Hollywood. His performance in The Strange Love Of Martha Ivers, led to supporting roles in Mourning Becomes Electra, and, Out Of The Past, among other lauded performances that would ultimately lead Douglas down the path to super stardom. 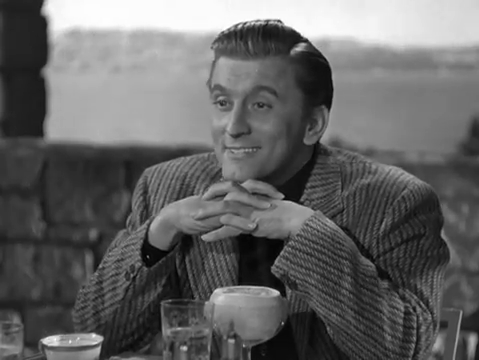 A polished professional from the very beginning, Douglas had only made eight films when he received his first Academy Award nomination for his role as Midge in Champion. Upon its release, critics and sports historians stated that Douglas’s acting was alarmingly authentic, perfectly executing every element of his character. 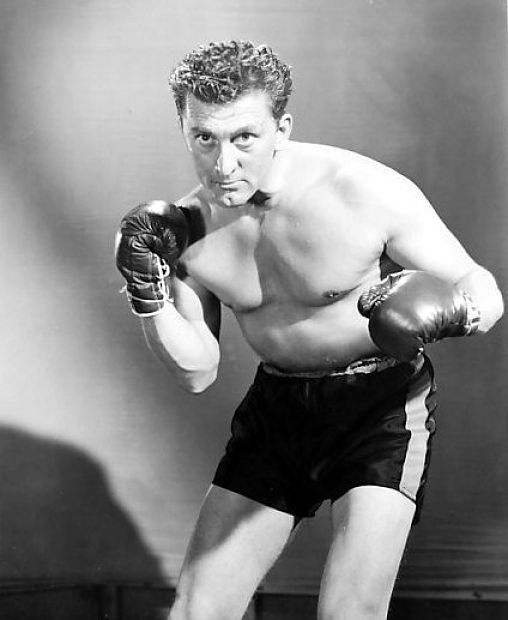 Whatever role he graced, Kirk Douglas always delivered his own scripted brand of artistry to the film. Throughout the 1950’s, Douglas appeared in an array of diverse roles that garnered him critical acclaim. In 1951, he was given the opportunity to reunite with his friend Lauren Bacall when he played the counterpart to Bacall’s character in Young Man With A Horn.

The 1950’s, was a busy decade for Kirk Douglas. It was during this period that his star status catapulted to an even higher pinnacle. Along with churning out picture after picture, Douglas formed Bryna Productions in 1955, a movie company that is named after his mother. Despite the fact that he had to cancel contracts with Hal Wallis and Warner Brothers’, Bryna Productions opened up even greater opportunities, and now Kirk Douglas was producing his own films as well as starring in them. 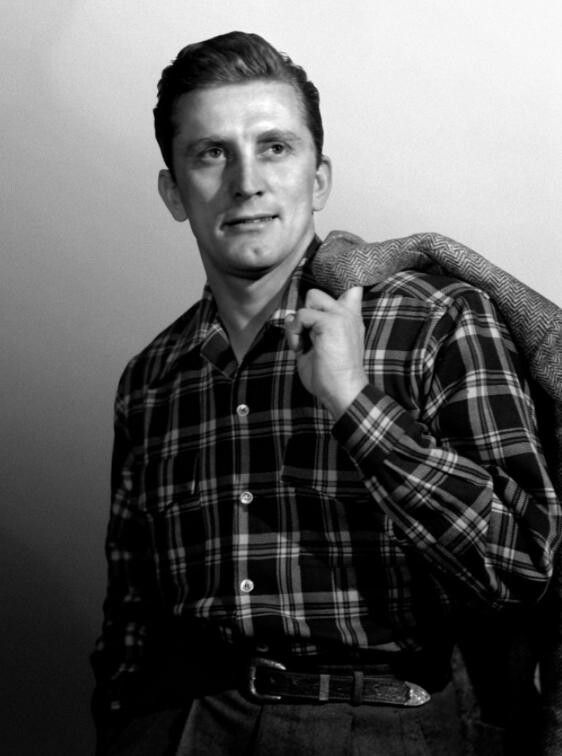 The following year he was cast as Vincent Van Gogh in Lust For Life, a biographical picture about the tortured artist whose revolutionary paintings still continue to have a great impact on aspiring artists. The film was an overall success, and Douglas received another Academy Award nomination, but was sadly robbed of the Oscar. Instead his co-star Anthony Quinn won for Best Supporting Actor.

While filming Lust For Life, Douglas met Anne Duydens, who was working as producer. The couple married on May 29th, 1954, and had two children, Peter and Eric Douglas. More than sixty year later, Douglas and Anne still endure a marriage filled with peace and happiness.

Most of Kirk Douglas’s films that were released around this time were successful. As well as being the executive producer, he played the lead role in the star-studded production, Spartacus. The film was considered to be among the most expensive ever made, but the end result was worth all the effort. Screenwriter, Dalton Trumbo, who was on the Hollywood Blacklist received full credit for his work in the picture, and after all the merits he attained, the Blacklist was effectively ended. Douglas later stated, “I’ve made over 85 pictures, but the thing I’m most proud of is breaking the blacklist.”

Breaking the Blacklist was a risky venture for someone like Douglas who held a prominent reign over Hollywood. After years of being in a prestige position, Douglas now feared for his career, which was under threat, but he was pleased that he did it, and as it turned out, he managed to escape any altercations regarding his career.

During the course of the next few decades he would go on to appear in more films with his frequent co-star, Burt Lancaster. In total, Douglas and Lancaster made seven films together, and would both sort out independent Hollywood careers as an actor and producer.

Kirk Douglas was one of those stars who never stopped working. He remained positively active well into the 21st century, and gave his last performance in the 2008 television movie, Empire State Building Murders, a tribute that celebrates American Film Noir and the icons of Hollywood’s golden age.

Despite being injured in a helicopter collision in 1991, suffering a severe stroke in 1996, which left him with a speaking impairment, and losing his son Eric from a drug overdose in 2004, Kirk Douglas has remained largely active in the public eye. Throughout his life he has donated to numerous charity organizations, and along with his wife Anne, he engages himself in volunteer and philanthropic activities. With sheer dedication and devotion to their work, Douglas and his wife Anne have traveled to more than forty countries at their own expense to act as Goodwill Ambassadors for the U.S Information Agency.

The recipe to Kirk Douglas’ success is that he never stopped acting. In a career that spans over sixty years, Douglas is considered to be a treasure to the film industry. His multitude of achievements along with his contribution to motion pictures will continue to leave an indelible mark on cinematic history.

Happy 100th Birthday Kirk, and here’s to many more.