A virtuoso of motion pictures, Bette Davis was an indomitable actress whose versatility and scripted brand of artistry was showcased in an array of memorable productions that have left an indelible mark on cinematic history.

Earlier this year I hosted the Bette Davis Blogathon, which took place over her birthday weekend in April. Because the blogathon was such a success, I have decided to make it an annual event. This time however, I’m bringing the blogathon forward to March. The reason for this is that Bette shares a birthday with three other legendary icons from the silver screen, and some might consider it unfair that I honor Bette with a blogathon while the other three get left out. I also decided to hold it on these dates because March 26th marks the 79th anniversary of the release of Jezebel, the film in which Bette received her second Academy Award for her performance.

1. Participants are welcome to write about any subject relating to Bette Davis or any aspect of her life and career. As long as the topic relates to Bette or her filmography, I’ll accept it.

2. Because Bette Davis has an extensive resume of films, I will be allowing no more than two duplicates. There are a wealth of topics regarding Bette. Remember, your choice doesn’t have to be a movie. If you have a subject in mind, act fast.

4. To express your interest in participating in the blogathon, leave a comment on my blog, along with the name and URL of your blog, and the subject you wish to cover, or you can always register by email at: carolelombardforever@yahoo.com. For those of you who wish to register by email, please be sure to include the name and URL of your blog, and the topic you wish to cover. Once you get confirmation, please spread the word about this blogathon by advertising the event on your blog. Below are a few banners, so grab yourself a banner, and let’s celebrate the unparalleled talents of Bette Davis. 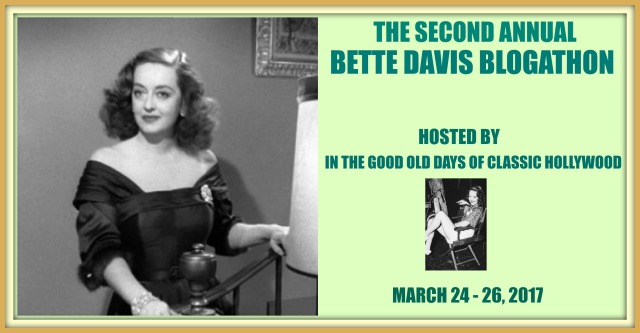 In The Good Old Days Of Classic Hollywood: TBA

Gary Pedroni: Guest post on In The Good Old Days Of Classic Hollywood: Bette Davis as Margo Channing in All About Eve ( 1950 )

Taking Up Room: Now Voyager ( 1942 ), Bette’s real life involvement with the war effort, and the Hollywood Canteen, and Of Human Bondage ( 1934 )

Goose Pimply All Over: Bette Davis’ appearance on Dick Cavett