This is my contribution to the Beatles Film Blogathon, which is hosted by Steve at ‘Movie Movie Blog Blog’. Click here to read the other entries that are being exhibited during this event. 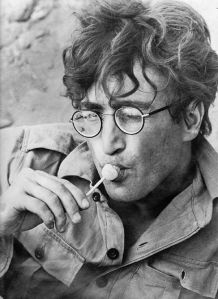 Growing up with a family that have always marveled at the likes of the Beatles, I came to appreciate their music from a young age, though I have never called myself an avid fan. To me when the Beatles are discussed, I associate them more with John Lennon, who was the co-founder of the band, and would go on to have success

in his illustrious career as a solo singer, until his life came to a tragic end in December 1980. 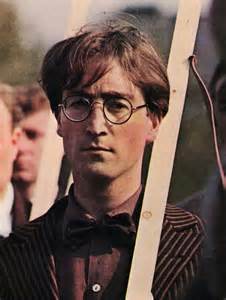 Besides from the triumph he attained with his musical career, John Lennon endured a brief tenor as an actor, though these movies never brought him the recognition that he garnered as a musical artist, and after a few films, where his roles were diminutive in quantity, he returned to his ingenuity as a singer. 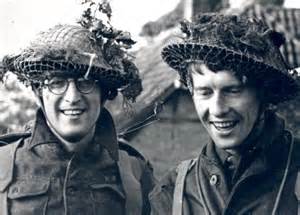 During this short period, he starred alongside Michael Crawford in the wartime farce, “How I Won The War”, a 1967 vehicle that was directed and produced by Richard Lester , and based on a novel by Patrick Ryan, with John Lennon portraying a naïve pessimist, who is enlisted under the inept command of Lieutenant Earnest Goodbody. Today the film is largely forgotten by audiences, and is mainly primarily remembered by John Lennon fans, who at the time of the release were elated to see their idol appear in a non musical role, but after their first viewing they were disappointed to discover

that Lennon only had a minor part, and was overshadowed by Michael Crawford, who gained top billing.  Critics weren’t too conciliatory either, and were rather calumnious of the finished production, that sadly John Lennon’s attempt at motion pictures were disregarded. 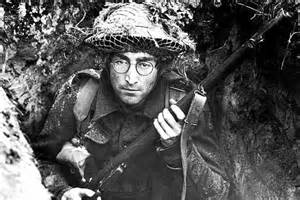 Before the commencement of the production, John Lennon was maintaining a hectic lifestyle, and was constantly on the road touring for four years straight, so when Richard Lester proposed the question to him about playing  Musketeer Gripweed in “How I Won The War”, he eagerly accepted, and started to prepare for the role, in which he underwent many changes, such as having his hair trimmed down and wearing granny-like” glasses that would soon become his sartorial trademark. 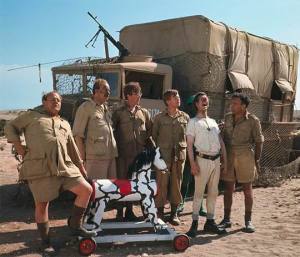 For a movie that looks like it was made on the cheap, it actually had a rather costly budget due to being filmed at various locations that included, Bergen-Hohne Training Area in Verden An Der Aller, the Almeria Province in Spain and Twickenham Film Studios in London. With the shooting taking place at Almeria, John Lennon rented a villa called Santa Isobel, a lavish residence with grand commodious rooms and wrought iron gates

, surrounded by lush vegetation that bore a resemblance to Strawberry Field, a salvation army garden situated near Lennon’s childhood home in Liverpool. This observation piqued an interest in Lennon to write the song “Strawberry Fields Forever” while filming. 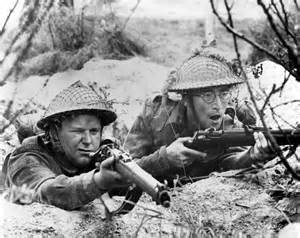 The plot revolves around the story of Lieutenant Goodbody ( Michael Crawford ) an incompetent World War II commissioner, who leads his troupes through a series of cataclysms, while trying to rid themselves of their complete liability of a commander. 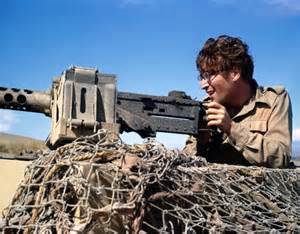 “How I Won The War” is a modern day take on screwball comedy, but this satirical method didn’t quite gel with this production, and the result was literally a disaster. That being said, the film is not entirely awful, though it could have been a lot better if they left the screwball antics and the whimsical characters out of the movie and focused on more dramatic aspects of the war.

Apart from the satirical plot and farcical characters there is a very serious element. Lester integrates morbid battle-scenes into the plot, spliced in amongst the comedic genius of the cast, whilst simultaneously claiming the soldiers as no more than actorsPLAYING

a game, commenting on the way the war is often represented in cinema – with glory and heroism. This is the main point of the film. As Richard Lester himself said, “It does reflect a desperately sincere attitude towards the glorification of war by show business

… One of the gross obscenities about the war is the war film itself … like a big adventure with extras being killed in the way of a Western.” 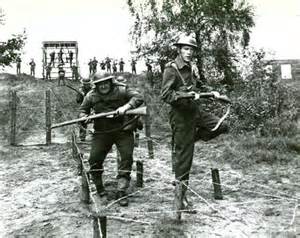 John Lennon found the Spanish location quite boring, so Ringo Starr flew out to keep him company.

The intended concept of the film was that archival black and white footage of each battle was to be tinted specific colors. The soldiers who died in that battleCONTINUE

to accompany the unit silently with their uniforms now the color of the battle they died in. However, when the final answer print was sent from the principal lab in England to the labs in Los Angeles subcontracted out to make the release prints, the LA labs assumed that the tinted footage was a mistake, and graded it back to black and white without notifying anyone until the whole batch was struck.

The version of the film shown on “Retroplex” from Starz has the battle scenes tinted different colors and the soldiers who die in a battle become that color. John Lennon recorded all post-synchronization work for his character in the film from December 28-29, 1966, at Twickenham Film Studios in London, England. 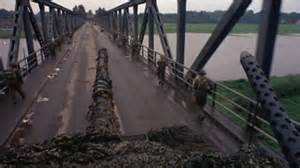 Gripweed: “No, I play the harmonica.”

Gripweed: “And I’m not a thief, really. I’ve never found anything worth keeping.”

Goodbody: [talking aloud to himself] “I can’t, I fear, I can’t march properly on my own, as an officer, in the public eye.”

Juniper: [sitting in back of a truck, smoking, holding a broom] “Isn’t that sickening when that happens to a chap? Couldn’t your drill instructor do something about it? Like a quick jab up the crotch with a broom bass?” [holds up broom] 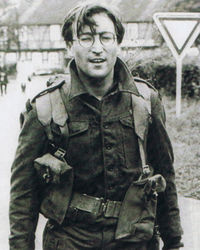 John Lennon: Born, John Winston Lennon on October 9th, 1940 in Liverpool, England. Died: December 8th, 1980 in New York. Cause of death: Murdered by Mark David Chapman outside the Dakota Building, while he was returning home with Yoko Ono, at about 10:50 pm. Aged: 40.