“You must make your own life amongst the living and, whether you meet fair winds or foul, find your own way to harbor in the end.” 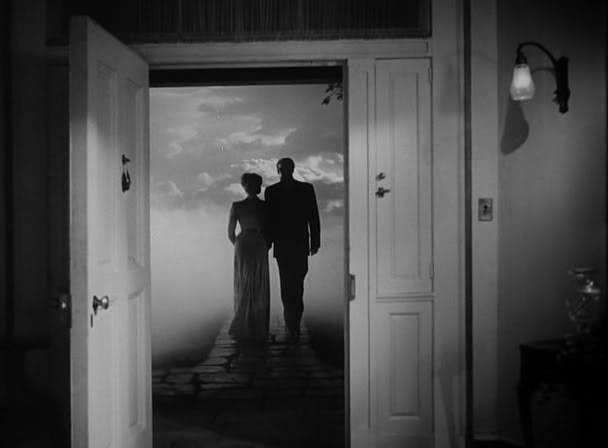 Today marks the 95th Birthday of Gene Tierney, the critically acclaimed actress who is best known for her roles in Laura, The Ghost And Mrs. Muir and Leave Her To Heaven. In commemoration of her special day, The Ellie Badge is hosting a blogthon dedicated to her memory. The following is my article for the blogathon. Please click here to view the other entries being exhibited during this event.

Cinema has certainly had it’s share of ghost stories being produced though the years, but none of these productions have garnered the reputation or reached the pinnacle of inspiration that The Ghost And Mrs. Muir attained.

In some cases in Hollywood, the format known as ghostly expressionism was often considered cheap and campy. While an innumerable amount of these productions were labelled as B-Grade films, there have been other circumstances when this formation had taken on a whole new level, most notably in films like The Uninvited and The Ghost And Mrs. Muir, which helped pave the way for other ghost stories of the time.

The Ghost And Mrs. Muir was a picture that was more than what it was bargained for. From the moment that the idea of adapting the story to the screen evolved, Twentieth Century Fox immediately determined that the novel boasted enough elements that could be deemed successful for a film. It was hauntingly ghostly, it had romance that was wrapped around an illusionary fantasy, and it had chilling intrigue. That was definitely enough for a movie production to be developed.

The history of The Ghost And Mrs. Muir dates back to 1945 when Josephine Leslie who is primarily known as R. A. Dick published the book The Ghost Of Captain Gregg and Mrs. Muir to an auspicious release in the United Kingdom. That same year before the book even entered into America, Twentieth Century Fox obtained a copy and was instantly impressed that they wanted to make a movie out of it. Shortly after, Fox secured the rights to the novel and preparations for the motion picture began.

In early 1947 after everything was finalized, filming for The Ghost And Mrs. Muir commenced. Headlining the production was Gene Tierney, Rex Harrison, George Sanders and Natalie Wood who all worked commendably under the superb direction by Joseph L. Mankiewicz.

Since it’s initial release, The Ghost And Mrs. Muir has followed many paths which started off as an hour long radio play that was adapted from the movie and was led to a transformation into a television series between 1968 and 1970, starring Hope Lange and Edward Mulhare.

The film itself proved to be everything Fox had hoped it to be. It was a triumphant success and is now crowned as a timeless love story for the ages, but for Gene Tierney who was euphoric about starring in the lead role, the production started off rough and resulted in Tierney enduring months of pain all throughout the filming process.

Not long after filming commenced, Tierney was scurrying up a flight of stairs to see a friends new baby when she tripped on a step and was immediately inflicted with exacerbating pain which forced Tierney to consult with her doctor on the drive home where it was discovered that she had broken a bone in her foot.

This was a tremendous set back for the production company. While her foot was in a cast and healing, filming was delayed. Even the task of shooting around her was onerous, but once the cast came off, Gene Tierney went full swing into the picture and even in pain she was determined to make a hit of it.

The film takes place in 1900, and revolves around the story of the young widow, Lucy Muir ( Gene Tierney ) who is currently residing with her domineering mother and sister in law in London. Determined to make a home of her own for her and her daughter, Anna ( Natalie Wood ) she purchases Gull Cottage, an isolated haunted mansion situated on the English seaside village of Whitecliff.

On the first night in her new home, Lucy is charmed by the ghostly presence of Daniel Gregg ( Rex Harrison ) a sea captain and former owner of the cottage. During the course of the next twelve months, Lucy and the captain share a secret bond that leads to the couple collaborating on a book project about Gregg’s life, but when Lucy meets and falls in love with the deceitful Miles Fairley ( George Sanders ) Captain Daniel is initially jealous and decides to disappear from Lucy’s life and makes her believe that she wrote the book alone and he was just a dream.

The Ghost And Mrs. Muir was the brainchild of Joseph L. Mankiewicz, the prominent director who established a reputation for notable women’s pictures while under contract for MGM, but once relocating to Twentieth Century Fox, Mankiewicz acquired a rather rewarding contract that allowed him to be totally innovative. For years he had yearned to step out of the boundaries that he was accustomed to and direct a film to suit his interests, and now being under the helm of Fox allowed him the opportunity to choose his own writer, director or producer, and as a result this exquisitely crafted masterpiece was born.

This was like a dream come true for Joseph L. Mankiewicz. He had his own picture to fit his desire, but with all the positives came some altercations. Mankiewicz had originally wanted Claudette Colbert to play Lucy Muir. He had known Colbert since their days at Paramount in the 1930’s, and what he witnessed in Colbert was exactly what Lucy Muir inhabited, but Fox was adamant about casting Gene Tierney in the role. 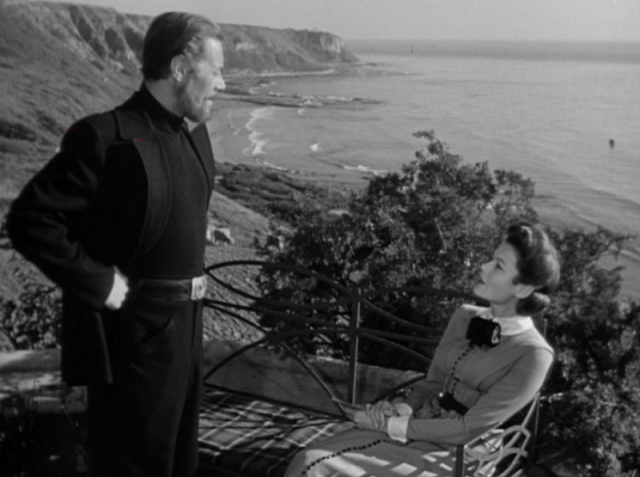 At the time, Gene Tierney was an eminent star on the Twentieth Century Fox lot. Three years earlier in 1944, Tierney had attained a myriad of accolades for Laura, and had recently garnered critical acclaim for Leave Her To Heaven. With such prestigious productions on her resume, Gene Tierney was the perfect choice for Lucy Muir. However Mankiewicz held different opinions. He displayed nothing but contempt for Tierney and Jeanne Crain and considered them both to lack dramatic potential.

“Perhaps, he did come back and talk to us? Wouldn’t it be wonderful if he had? Then you’d have something – you know what I mean – to look back on with happiness.”

In the long run, Mankiewicz’s assumption of Gene Tierney proved to be false. For The Ghost And Mrs. Muir, Tierney with her alluring beauty and immaculate charm was able to successfully carry the role as the protagonist, Lucy Muir to a flawless effect.

Gene Tierney as Lucy Muir is captivating as the obstinate widow who yearns for a proper place in society for her and her daughter, Anna, played by Natalie Wood. Ever since the death of her husband she has been trapped under the strict authoritarian of her mother and sister in law in their dark and dreary London residence. With her persistence, Lucy purchases the haunted Gull Cottage and plans to spend the rest of her existence there.

“You can be much more alone with other people than you are by yourself, even if it’s people you love. That sounds all mixed up, doesn’t it?”

Occupying Gull Cottage is the ghost of the boisterous sea captain, Daniel Gregg. Lucy knows the truth about the mansion when she moves in, but instead of being scared she confronts the ghost who at first implores her to leave the house but after a while he reluctantly agrees for her to stay. Despite from a few differences and disagreements, Lucy and the Captain form a steady friendship which continues through the vicissitude of a best seller book of Daniel’s life, but after a year he ceases being an obstacle in her happiness which for a short time she has found with Miles Fairley ( George Sanders ) who Captain Gregg happens to know the deplorable secret he is hiding from Lucy. 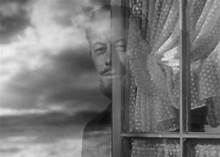 The scenes between Lucy and the Captain contain a romantic touch that is abounded by a rather visionary ambience that surrounds them. Despite their relationship being challenging for that fact that Lucy is alive and Daniel a deceased spirit, the two inhabit resembling personalities. Daniel appears devilish but at heart he is amiable while Lucy possesses an altruistic nature. That is why gene Tierney and Rex Harrison displayed an undeniable chemistry which helps cements The Ghost And Mrs. Muir as a staple. 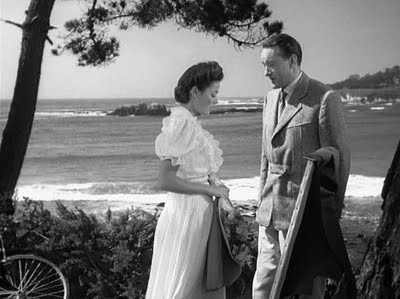 Unlike an array of the ghost stories that were largely popular in the 30s and 40s, The Ghost And Mrs. Muir is a sophisticated production that is solely made viewing material for adults. In addition to the lush feature is the intelligent script and astute and often witty dialogue that comes from the mouth of Caption Daniel Gregg with his acidic aura. 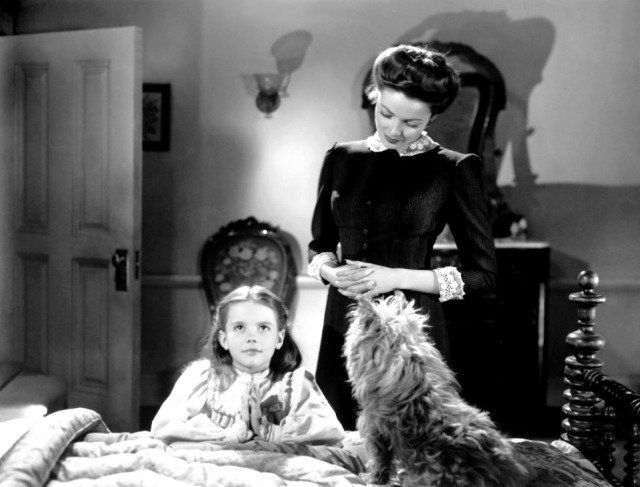 Another creditable aspect of the film are the costumes that are designed by Gene Tierney’s husband, Oleg Cassini, who created all of Tierney’s gowns during this period.

The Ghost And Mrs. Muir is a perfect example of Cassini’s flair for finely detailing costumes. In the film Tierney is adorned in elegant, stylish, casual and period wear, and accessorizes them to appear historically authentic.

There is no other way to describe The Ghost And Mrs. Muir than unforgettable. This film defines the true art of movie making. From the haunting musical score and the dreamy, romantic backdrop of the sea and the waves rapidly hitting the rocky shore to the eerie, chilling finale which is forever embalmed on the face of cinematic history, The Ghost And Mrs. Muir remains one of the most enthralling film extravaganzas to ever grace the silver screen.

The word “muir” means “the sea” in Gaelic. Many times sailors are said to have been “married” to the sea, or that the only woman they ever loved was the sea.

The address given to Lucy Muir as the home of Miles Fairley as 14 Albemarle Street in London is an actual address. The address is the door to walk-up apartments, and is next to a Tiffany & Co. Shop.

Gene Tierney‘s first approach to the character of Lucy Muir was playful, almost screwball. After a conference between Darryl F. Zanuck and director Joseph L. Mankiewicz, the first two days shooting were redone so that Tierney could give the character more depth. The change resulted in huge critical acclaim for the actress. 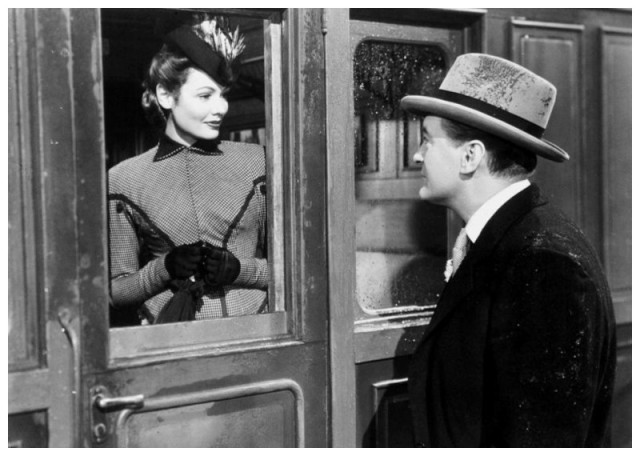